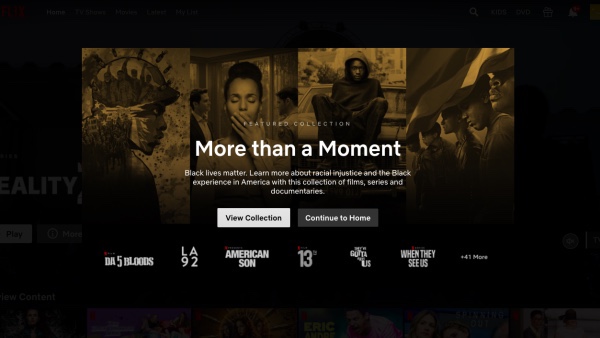 The next time you log onto Netflix you’ll see a new feature. The streaming service has launched “More Than A Movement” which is designed to feature “powerful and complex narratives about the Black experience.” The curated content includes the documentary 13th, Mudbound, Orange Is The New Black, Moonlight, When They See Us and Spike Lee’s new film Da 5 Bloods. Netflix recently tweeted, “When we … END_OF_DOCUMENT_TOKEN_TO_BE_REPLACED

The 2018 film Mario, from Switzerland, tells a beautiful story of two footballers who unexpectedly fall in love. The film’s titular character Mario is a rising football (soccer for US readers) star. He has a promising career ahead of him and all those around him including his father want to make sure he succeeds. While training for current season, the team adds a new player, … END_OF_DOCUMENT_TOKEN_TO_BE_REPLACED

Lovebirds was originally supposed to be released theatrically this spring, but those plans got axed because of the coronavirus. Luckily Netflix swooped in and released the movie on the streaming platform last week and we’re all the better for it. I started watching the film, not knowing much about it. I just knew it was a romcom that starred Issa Rae (Insecure) and Kumail Nanjiani … END_OF_DOCUMENT_TOKEN_TO_BE_REPLACED

Fans have been clamoring for Warner Brothers to release Zack Snyder’s director’s cut of his 2017 superhero film “Justice League” and now their wish has come true. HBO Max will make this version of the movie available in 2021. Snyder had to step away from his directorial duties on the film due to a personal tragedy and director Joss Whedon took over to do reshoots … END_OF_DOCUMENT_TOKEN_TO_BE_REPLACED

CBS has announced that it will air a “Grease” sing-a-long on Sunday June 7th as part of it’s Sunday Night Movies franchise.The 1978 hit stars Olivia Newton-John and John Travolta has star crossed high school sweethearts. While this is a fun movie, the mature themes might be a bit much for parents to let children under 14 watch. Although, they did change some of the … END_OF_DOCUMENT_TOKEN_TO_BE_REPLACED