3 SHOWS TO BINGE THIS WEEKEND

This weekend after enjoying the warmer weather, curl up on the sofa and binge a show or two. Here are a few recommendations. SUPERSTORE (NBC) This is a show I […]

This weekend after enjoying the warmer weather, curl up on the sofa and binge a show or two. Here are a few recommendations.

This is a show I slept on during its first season, but a few binges later and I can officially call myself a fan! America Ferrera leads and incredible ensemble in what is NBC’s most consistently funny comedy. I don’t say this often, but this show is perfectly cast! Even if you don’t start from the beginning SUPERSTORE is easy to get into from any point in the series. Do yourself a favor and check it out. Episodes are available on VOD, NBC.com and Hulu.

This gem of a show doesn’t get a lot of mainstream buzz, but everyone that I know who watched season one fell in love with it immediately. Set at a predominately white Ivy League school, the show explores the experiences of the students of color in that world. Each episode is presented from a different character’s point of view and this device is brilliant. DEAR WHITE PEOPLE shows how one inciting event plays out and affects the student body. Season 2 of the show will be made available on Friday May 4 so this weekend is a perfect time to catch up the first 10 episodes.

ONE DAY AT A TIME (Netflix) 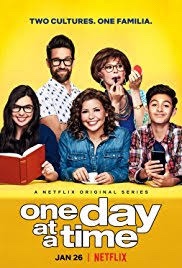 During the current trend of rebooting old tv shows, ONE DAY AT A TIME might be the best of the bunch. Based on the Norman Lear sitcom from 1975, this version of the show centers on a Cuban-American family led by single mom Penelope Alvarez (Justina Machado) and her eccentric mother Lydia (Rita Moreno). Penelope served in the military with her now ex-husband and now suffers from PTSD. She had two kids, Elena and Alex. I don’t want to spoil the many fine story points in the series’ two season, but I will say that ONE DAY AT A TIME is an incredibly inclusive show that celebrates diversity and in every episode shows pride in their Cuban heritage. After a loud campaign by fans, Netflix announced that there will be a third season of the show. The show also has fun paying homage to its parent series throughout various episodes.

With DEAR WHITE PEOPLE, ONE DAY AT A TIME is leading the way on digital platforms to tell diverse, inclusive stories.

Hi! I've loved watching tv since I was a kid and as an adult I get to do what I love and get paid for it! This such an exciting time for television with so much content and so many viewing options. I'm here to help you navigate through it all!