3 SHOWS I CAN’T LIVE WITHOUT ON SUNDAYS!

You know I love good soap opera and EMMERDALE, a British soap that’s been on the air since 1972, gives great soap! I’ve been watching for less than a year and so far a deranged woman delivered the baby of her nemesis, accidentally shot her son and was then murdered. Along with that, a teenager boy caused the death of his mother and grandfather, leaving his aunt with brain damage and memory loss after making his family believe he had committed suicide! And the show isn’t short on romance. Super couples Moira & Caine, and Aaron & Robert reunited.

I binge a week’s worth of EMMERDALE every Sunday using the BRITBOX app. If you’re a soap fan looking for a juicy new pleasure, EMMERDALE won’t disappoint. 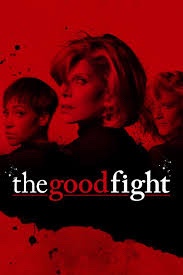 As a spinoff of THE GOOD WIFE (CBS), THE GOOD FIGHT had a lot to live up to and has exceeded all expectations. In season one, Diane Lockhart (Christine Baranski) left her law firm after Donald Trump won the election with hopes of retiring outside of the U.S. But, she soon came to find that her dear friend and financial advisor was the architect of a pyramid scheme that wiped her out. Forced to look for work and being declined by major firms, she finds her way to an all Black firm where Luca (Cush Jumbo) landed after Alicia Floreck and THE GOOD WIFE disappeared.

Season 1 of THE GOOD FIGHT was amazing. The series featuring an inclusive cast tackled social topics with grit and humor. The show isn’t suffering from a sophomore slump in season 2. The GOOD FIGHT set itself free from the season 1 pyramid scheme umbrella story and is enjoying creative highs not seen on many CBS broadcast dramas. I don’t want to spoil any storylines, but I can say Diana, Luca and team are still taking on hot topics like impeaching Trump, Chicago PD race relations and the challenges of a working woman who finds herself unexpectedly pregnant navigating corporate politics. I hope Emmy voters will actually watch the series and shower it with multiple nominations this year.

If you love prestige dramas then THE GOOD FIGHT is the show for you.

BARRY is a comedy. Kinda. It’s a smart, dark comedy that is so unpredictable I often find my mouth hanging open at the end of each episode. Bill Hader stars as Barry, a former Marine turned hit man who while on assignment in LA stumbles upon an acting class taught by Gene Cousineau (Henry Winkler). As you might have guessed a pretty girl is involved. Even though he’s a hit man, Barry rationalizes his job choice because he’s taking out the “bad guys.” But when his next target turns out not to be such a bad guy, Barry thinks it’s time for him to move his life in a new direction, but given the company he’s kept, that might not be so easy.

Every week there’s an unexpected twist that leaves me anxiously wanting to know what happens next. I’m generally not a fan of shows about actors as characters but BARRY gets it right. The show leans into the self absorption of this group of thespians and their insecurities. They’re often absurd, often sweet and sympathetic.

But the breakout is Henry Winkler. His performance as a Gene, a man who still wishes for his big break is hysterical yet heartbreaking. In one episode we see Gene go out on an audition and Winkler’s performance in that scene alone is EMMY worthy.

I’ve never paid much attention to Bill Hader and wasn’t particularly anticipating the arrival of BARRY on Sunday nights but I’m sure glad I have it a shot.

What are you watching on Sunday nights? Let me know in the comments.