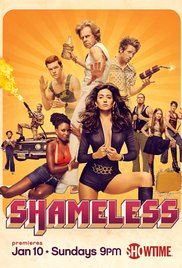 If you’re not excited about the showdown between the Broncos and the Panthers in the Super Bowl tonight, here are a few alternate viewing options.  But, you’ll probably want to press pause and check out the half time show to see what surprises Beyonce has in store when she joins Coldplay on stage.

In the meantime check out episodes of these shows where available On-Demand, Netflix, Hulu or their network website:

AMERICAN CRIME is probably the most daring drama on broadcast television right now.  Season 2 is tackling the subject of male-on-male rape, what it means and peoples perceptions if it being an actual possibility.  Regina King is a stand out among a stellar cast.  Listen to my podcast for more of my thoughts on the show.

SHAMELESS is having an interesting season. The Gallagher family has gone through so much over the  years, I was hoping this season would be a little lighter and more fun. But, this is SHAMELESS we’re talking about and the show is cleverly tackling teen pregnancy, abortion, and guns in school.  The show continues to explore the journey of Ian’s struggle with bipolar disorder and how he’s got to figure out how to move on with his life and not keep feeling sorry for himself.  SHAMELESS sets a high bar with this storyline.  Don’t worry the show still finds time to be sexy, messy and funny.

Julia Louis-Dreyfuss is brilliant as VP of the United States fighter her way to the presidency.   While we might cringe at moments during our current presidential race, the faux pas of Selina and her staff will make you laugh out loud.

Gabrielle Union is a stunner in BEING MARY JANE. She plays Mary Jane’s sexiness, and messiness as deftly as any lead actress on more buzzed about shows like EMPIRE, HOMELAND and SCANDAL.  As single woman trying to navigate her career and troubled love life, she also has her often needy family to contend with. BEING MARY JANE has set a new bar for the scripted programming on BET and it deserves more notice in the mainstream press than it gets.

MICHAEL JACKSON’S JOURNEY FROM MOTOWN FROM OFF THE WALL (SHOWTIME):

While this is actually a documentary, I highly recommend it to all music or just pop culture lovers. The documentary is filled with interviews with those who worked with Michael Jackson while he was still a member of The Jacksons to his evolution as a solo artist.  The doc also features interviews with Michael, reminding us of what a genius he really was.