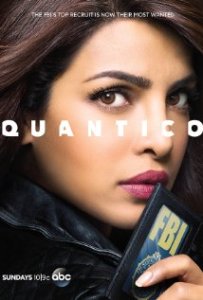 Prior to its premiere and based on the ABC promos it was easy to dismiss QUANTICO as nothing more than “HOW TO GET AWAY WITH TERRORISM.” After all, at first glance the setup for the series sounds like a ripoff of HOW TO GET AWAY WITH MURDER.  Instead of lawyers, an aspiring group of FBI agent trainees are at the center of a murder mystery that is told in present time and flashbacks, just like the Viola Davis led legal drama.  QUANTICO even has an African American woman as the head of the FBI training program.

But, I was pleasantly surprised to see that after three episodes QUANTICO stands on its own as a solid mystery series with Indian actress Priyanka Chopra at the center of the mystery.  ABC casting gets an A+ for casting Chopra who was unknown to American audiences, but will soon be gracing the covers of every magazine imaginable.  We learn in the pilot that Chopra’s character, FBI agent Alex Parrish is the prime suspect for a bombing at Grand Central Station in NYC. We learn through flashbacks that none of Alex’s FBI classmates are who or what they seem, each carrying multiple secrets and identities.

QUANTICO reminds me of the first season of LOST.  It has richly multilayered characters, a compelling plot and unpredictable twists at every turn.  I just hope that the writers and producers figure out a way to resolve this initial mystery without dragging it on for six or seven seasons.  I suggest they learn a lesson from THE KILLING which decided to play out  its initial murder mystery over the course of two seasons, losing most of its viewers along the way.  HOW TO GET AWAY WITH MURDER has expertly wrapped up its original murder mystery, and set up new stories while allowing the characters to still be affected by the events of season one.

It seems as though the producers have mapped out enough of the QUANTICO story so that it doesn’t feel like they’re making it up from week to week (yes BLOOD & OIL I’m looking at you!). The show has a quick pace and edge of your seat storytelling that keeps me engaged throughout the hour.

With a cast of mostly unknowns (Priyanka Chopra is a huge star in India), QUANTICO has been able to quickly give you characters to love and love to hate.  Aside from Chopra, other cast standouts include resident hunk Jake McLaughlin as Agent Ryan Booth, Tate Ellington as the “is he really gay” Simon Asher and Aunjanue Ellis as Quantico Training Director Miranda Shaw.

Strong writing, sharp directing and solid acting from the ensemble gives me hope that QUANTICO will deliver an exciting freshman season.  It’s fun to follow the story and wonder where it will go next.